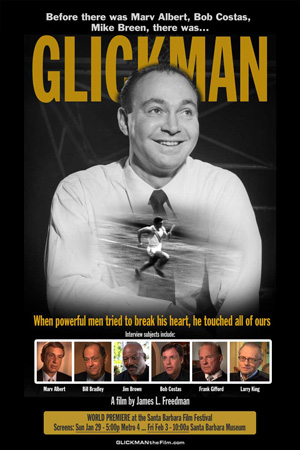 A great story that needed to be told. James L. Freedman puts together archived footage and stills of the late Marty Glickman along with interviews with many of the contemporary sportscasters that he influenced. The result is an inspiring story of a man who faced many obstacles in life yet seemed to always come out on top. It's a true story of a man that was intensley loyal to those around him and a man whose influence can still be seen and heard in every football or basketball broadcast today.

Glickman is the triumphant story of the great Marty Glickman, a record-setting Jewish sprinter who was dropped from America's Olympic relay team during the 1936 Nazi Olympics in order to appease Adolph Hitler. However, this incident did not dampen Marty's love for sports, and he went on to become a beloved sports announcer revolutionizing sports broadcasting by inventing such classical basketball terms as "swish!" In his legendary fifty year career, he would become the beloved voice of the New York Knicks, Giants, and Jets, and would later go on to create HBO Sports.

This extraordinary film will be making its world premier at the Santa Barbara International Film Festival on Sunday, January 29 at 5:00pm at the Metro 4