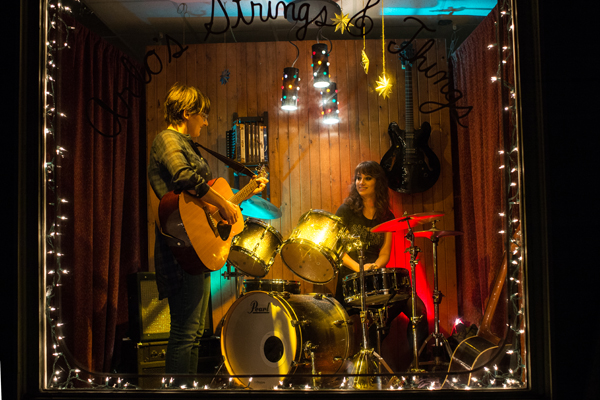 To say that Justine (Tanya Davis) is stuck in a rut would be an understatement. She hates her mind-numbing job as a data management copywriter; she can’t stop sleeping with her ex-boyfriend Ben (Stewart Legere); and not only does she live in her grandma’s old house, but she wears her granny’s old bras (Hey, they fit great). When things around her start to change — her best friend has a baby; Ben up and leaves town — she’s finally forced to deal with her attachment issues and find a way to move forward and define her own life. In a series of amusing missteps (including trying to convince Ben to have a baby with her), Justine recognizes that she has drifted away from her true passion, music, in part because of an embarrassing stage-fright incident in the past. Once she confronts her fears and reconnects with her music, however, the future suddenly seems full of possibilities — especially after she meets irresistible fellow musician Ruby (Stephanie Clattenburg). Moving to its own laid-back rhythm and featuring Dorfman’s delightful animation, HEARTBEAT has a vibrant, handcrafted quality. The director has consistently created funny, original, and heartwarming portraits of self-discovery, and she has an ideal collaborator in Davis (a poet and singer-songwriter in her first starring role), who imbues Justine with an awkward, wide-eyed honesty, not to mention a soothingly beautiful voice. With its richly drawn Halifax milieu filled with memorable characters, this is Dorfman’s most mature and accomplished work to date. (Adapted from Agata Smoluch Del Sorbo, Toronto International Film Festival)