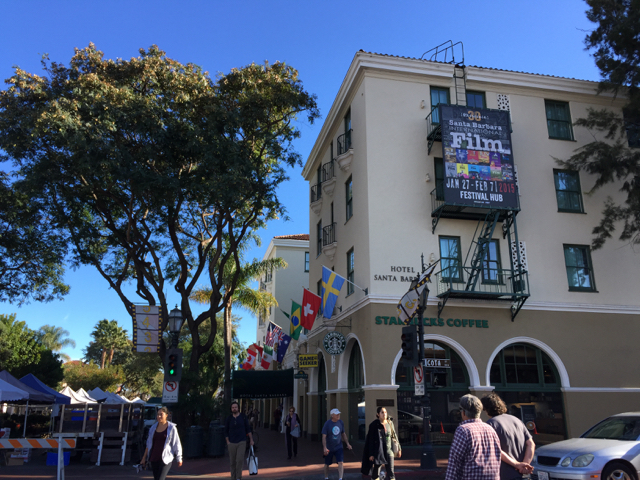 For the complete list with links to all the winning films - scroll down to the bottom!

Santa Barbara, CA -- The 30th Annual Santa Barbara International Film Festival, presented by UGG Australia, announced the winners of the 2015 festival competition at a Press Conference and Brunch Saturday morning at the Fess Parker – A Doubletree by Hilton Resort. The festival’s 30th edition proved once again that SBIFF consistently presents truly exceptional films, spanning many genres, generations and topics and even surpassed years past. This year we welcomed more filmmakers and attendees than ever before, and provided a fare that was embraced and celebrated by cinephiles from around the globe.

Commented Executive Director Roger Durling: “Audiences were treated to the most innovative and daring collection of films in our 30-year history, which is reflective of Santa Barbara’s eclectic and informed film-going community. We were thrilled by the response to this year’s slate, which was further enhanced by new sidebars, such as Cinematic Overtures, which featured films dealing with performance and dance, hence the opening night film Desert Dancer and this year’s audience choice winner.”

The Panavision Spirit Award for Independent Cinema, given to a unique independent feature that has been made outside mainstream Hollywood, went to Bang Bang Baby (US Premiere), directed by Jeffrey St. Jules and starring Jane Levy, Justin Chatwin, Peter Stormare, and David Reale about a small town teenager in the 1960s who believes her dreams of becoming a famous singer will come true when her rock star idol gets stranded in town. But a leak in a nearby chemical plant that is believed to be causing mass mutations threatens to turn her dream into a nightmare. Winner received a Panavision camera package worth $60,000.

James Read, along with Will Eubanks judged the Independent category, commented that it was a tough call, but Bang Bang Baby was like “Lynch meets Hairspray. Original, cool underlying metaphors, visually very interesting, some really neat performances and sometimes very touching…a unique vision.”

The Audience Choice Award, sponsored by the Santa Barbara Independent, went to the New Zealand documentary Hip Hop-eration (US Premiere), directed by Bryn Evans. The film follows a troupe of courageous, yet cheeky, senior citizens on an extraordinary quest to perform at the World Hip Hop Championships in Las Vegas.

The Best International Film Award went to Belgium’s All Cats Are Grey (Tous Les Chats Sont Gris) (US Premiere), directed by Savina Dellicour and starring Manon Capelle, Bouli Lanners, Anne Coesens, and Dune de Braconier. A private detective is approached by his estranged teenage daughter when she seeks his professional help in finding her biological father.

Adam Guettel and Mimi de Gruy chose All Cats are Grey because “it is quietly told but cohesive and compelling. The three leads are entirely real in their circumstances. It's a moving film.”

Best Documentary Film Award went to Children of the Arctic (US Premiere), Switzerland, directed by Nick Brandestini. At the Arctic edge of America, five Native Alaskan teenagers strive to be both modern American kids and the inheritors of an endangered whaling culture.

Said jurors Phyllis de Picciotto and Chaz Ebert, “We chose Children Of The Arctic because this extraordinary film about five Native Alaskan teens in Barrow, Alaska, the northern most community in the United States is important and timely. Every aspect of their daily lives, family history, customs, language, way of life and the environment that sustains them is at great risk of extinction. Nick Brandestini's portrait of the current lives of these teenagers and the decisions they have to make about their futures took us far away from the average cities in America to tiny towns in Alaska and helped us understand a very real gap in culture and values. Children Of The Arctic should be shown everywhere, including high schools and colleges.

The best Eastern European Film Award went to Monument to Michael Jackson(Spomenik Majklu Dzeksonu) (US Premiere), directed by Darko Lungulov and starring Natasa Tapuskovic, Ljubomir Bandovic, and Boris Milivojevic. In a desperate attempt to save his crumbling marriage and to bring life back into his community, a man plans to replace an old communist monument with a statue of the King of Pop.

The Bruce Corwin Award for Best Live Action Short Film Under 30 Minutes went to The Answers, directed by Michael Goode. Immediately after his death, a car crash victim gets answers to every question he’s ever had about his life, including what did it all mean?

Peter Chelsom, who along with Perry Lang judged the short films, commented that The Answers “might be considered by some to be a little 'commercial-like' and I would agree with that up to a point, but the fact is, for me, is that it was extremely well made and there must have been a good script behind it (you don't just 'find' those moments!). It touched me. I feel that among all the short filmmakers, this filmmaker is most likely to make features. And that's important. It's such a tough business that you have to be realistic in that regard. It was so well crafted. The compression was very good. The fact that it was under seven minutes might be a lesson to some of the others.”

The Bruce Corwin Award for Best Animation Short Film went to Load from Israel and directed by Niv Shpigel and Robert Moreno. Sinking under the weight of his own memories, a man confronts the questions: Is our past more important than life? What would we give up in order to keep on going?

The Fund for Santa Barbara Social Justice Award Sponsored by The Fund for Santa Barbara for a documentary film that addresses social justice issues went to A Snake Gives Birth To A Snake (US Premiere), directed by Michael Lessac. When South African actors tour war-torn regions around the globe they reflect on their homeland’s violent past, its impact on the world and their individual capacities to heal and forgive.

The 30th Santa Barbara International Film Festival, presented by UGG Australia, concludes with the US Premiere of Niki Caro’s McFarland, USA, starring Kevin Costner and Maria Bello. And as a special treat, the film was preceded by a performance of the Oscar-nominated song “Lost Stars,” performed by Gregg Alexander and Danielle Brisebois and band.

The schedule for the Third Weekend, featuring the Best of the Fest will be announced soon.