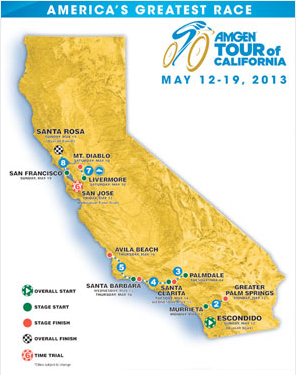 LOS ANGELES (November 27, 2012) - Twelve cities have been named official Host City partners for the 2013 Amgen Tour of California by AEG, presenter of the race, helping to make up the route which will take riders on a South to North course for the first time in the eight-year race history. Considered America's largest and most prestigious professional road cycling stage race, the eighth consecutive edition of the Amgen Tour of California will travel approximately 750 miles from May 12-19, 2013.

"Taking the Amgen Tour of California from South to North is something we always knew we wanted to do, and we are thrilled with the way things have come together for 2013," said Kristin Bachochin, executive director of the Amgen Tour of California and senior vice president of AEG Sports. "We think this will bring a whole new element to the competition for the elite cyclists who participate, not to mention some striking California scenery for our worldwide audience. California provides a variety of beautiful yet challenging terrain, helping us achieve our goal of creating a challenging route year after year while showcasing the very best this state has to offer."

The official race start, Stage 1, will begin and finish in Escondido, a city located in northern San Diego that had previously hosted 2009's spectacular overall finish. The next day, Stage 2 will take riders through the hot desert terrain from Murrieta to Greater Palm Springs, two cities making their race debut. For Stage 3, the race will return to Palmdale for a stage start and then travel approximately 100 miles west to the city of Santa Clarita. The city, which hosted the race in 2007, 2008, 2009 and 2011, will also serve as the start of Stage 4. From there, the cyclists will ride north toward the Pacific Coast and picturesque Santa Barbara, which last hosted the race in 2008, for the Stage 4 finish.

The race will remain in Santa Barbara for the start of Stage 5 of the 2013 Amgen Tour of California. Ocean views will provide the perfect backdrop for racers and spectators alike as the route heads north to Avila Beach for the Stage 5 finish. San Jose will play host to Stage 6 and the Individual Time Trial, marking the eighth consecutive year the race has visited the city. San Jose is the only city to participate in all eight editions of the race.

Stage 7 will start in Livermore and head to Mt. Diablo for an intense mountaintop finish. The eighth and final stage of the 2013 Amgen Tour of California will start in San Francisco and finish in Santa Rosa, which played host to the official race start last year.

Commenting on the 2013 route, Tejay van Garderen of the BMC Racing Team, who won the best young rider classification at this year's Tour de France and placed fourth overall at the 2012 Amgen Tour of California said, "Santa Rosa had big crowds and a huge reception last year for the start, so it will be exciting to go back to the hometown of the BMC Racing Team. I also spent a little time last winter in Santa Barbara, so that should be a fun town to finish in as well. As an American cyclist, the Amgen Tour of California is always a priority for me and our team, and I am looking forward to racing in California again in 2013."

"Each of the Host City partners announced today is unique in its own way and brings character to our race," continued to Bachochin. "We are looking forward to another exciting year and another intense competition."

Amgen returns as the race title sponsor for the eighth consecutive year, continuing to leverage the event to raise awareness of the important resources available to people affected by cancer through its Breakaway from Cancer® initiative. (For more information, www.breakawayfromcancer.com)

"The Amgen Tour of California has provided a platform for us to extend the reach of Breakaway from Cancer, a collaboration between Amgen and four nonprofit organizations dedicated to empowering patients through education, resources, and hope," said Bob Azelby, vice president and general manager, Amgen Oncology. "Given Amgen's mission to serve patients, we look forward to honoring cancer survivors and their loved ones in the host communities as the race travels throughout California."

Carrying an elite distinction, the Amgen Tour of California is listed on the international professional cycling calendar (2. HC, meaning "beyond category"), awarding important, world-ranking points to the top finishers.

The Amgen Tour of California continues to draw global attention as one of the most anticipated cycling events of the year - one that attracts Olympic medalists, World Champions and the top Tour de France competitors.

The 12 Host City partners for the 2013 Amgen Tour of California include:

In celebration of the Host Cities announcement, the newly designed 2013 race Leader Jersey, produced by the new, official Amgen Tour of California jersey supplier Champion System, is now available for purchase online at www.AmgenTourofCaliforniaStore.com. Also on sale is a special, Limited Edition Jersey, perfect for the cycling fan on your holiday gift list.

More details on the Champion System partnership will be released next month.